The World under the Rainbow is the fictional setting for the book As Blue As the Sea (Russian Синий как море, Sinij kak more) by Russian fantasy author Alexander Laik (Александр Лайк).

The number 8 is considered sacred by the nations under the Rainbow (originally there were eight nations/races that corresponded to the eight sacred colours: red, orange, yellow, green, cyan, blue, violet, and white), thus they use octal notation (the book describes the octal system of units similar to metric system). Preference of number eight is reflected in the calendar as well (so called "The New Calendar").

The Old Calendar was a lunisolar one. A year consisted of twelve months of varying length, and once in three years was appended with an additional "black month". The calendar was inaccurate and complicated, and later was discarded. Most nations relinquished the link between months and lunar cycle, and accepted 30-day months and 12-month years.

In the year 727 after the First Partition, it was decided that since months don't represent lunar phases anymore, there is no reason to keep them, and it's better to base the calendar on the sacred number 8. Thus the year was divided into 8 months consisting of 45 days, and five or six additional special days (known as "diamond days").

The Equilibrium Day is added approximately once in four years. There is no strict rule when to do so. The astronomers and mages of the Council of the Rainbow are watching over the motion of the Sun, and decide when it's time to suspend the leap year.

Karl Palmen suggested how to improve this calendar. He points out, that if the Equilibrium Day were occurring not at the end of the year, but once in every 33 months (i.e. its position would shift forward once in four years and one month) it would produce a mean year of 365.242424... days, which is very accurate for the northern spring equinox.

Hellerick suggested design of a device that would help keeping track of the Equilibrium Days. It consists of a disk with 405 sockets in it, and two marbles to be put into these sockets: 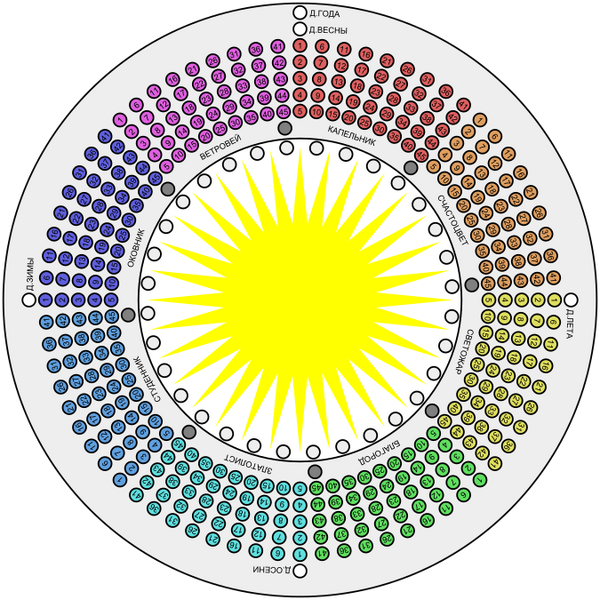 The disk is divided into two circles: the year circle (the outer light-gray ring) with 373 sockets, and the solar circle (the inner white circle) with 32 sockets.

One marble is to be put into one of the sockets of the year circle. Every socket represents a day. Once day the marble should be shifted in direction from periphery to center, and then clockwise. The “rainbow” days are the days of the 8 months, they are grouped into 72 five-day weeks (nine weeks per month). The five white sockets represent the diamond days, the top one is the Year Day, the other four are the season days. The black sockets in the end of every month represent the possible positions of the Equilibrium Day.

The other marble is to be put into the sockets of the solar circle — it shows the current position within 33-year circle. The marble of the solar circle should be shifted one socket clockwise when the marble of the year circle passes it, i.e. about once in 33/32=1.03125 years. In such a way it completes the full circle in 33 years. (It should be prevented from from moving the marble twice in a row, when just about two weeks has passed.)

The marble of the year circle goes into the socket for Equilibrium Day only when the marble of solar circle is in front of it.

Retrieved from "https://calendars.wikia.org/wiki/Calendar_of_the_Rainbow?oldid=8551"
Community content is available under CC-BY-SA unless otherwise noted.