In mathematics, a continued fraction is an expression such as 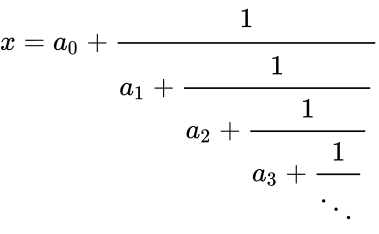 The study of continued fractions is motivated by a desire to have a "mathematically pure" representation for the real numbers.

For calendars, the continued fraction can show the structure of an intercalation cycle, where the intercalary years are as evenly spaced as possible.

Most people are familiar with the decimal representation of real numbers:

This representation has some problems, however. One problem is the appearance of the arbitrary constant 10 in the formula above. Why 10? This is because of a biological accident, not because of anything related to mathematics. 10 is used because it is the standard base of our number system (10 fingers); we may just as well use base 8 (octal) or base 2 (binary). Another problem is that many rational numbers lack finite representations in this system. For example, the number 1/3 is represented by the infinite sequence {0, 3, 3, 3, 3, ....}.

The continued fraction representation of real numbers can be defined in this way. It has several desirable properties:

To calculate a continued fraction representation of a number r, write down the integer part of r. Subtract this integer part from r. If the difference is 0, stop; otherwise find the reciprocal of the difference and repeat. The procedure will halt if and only if r was rational.

Use in Calendars[edit | edit source]

The continued fractions can be used in calendars to create intercalation cycles. See lunisolar calendar for years in months, lunar calendar for months in days.

Cataldi represented a continued fraction as

with the dots indicating where the following fractions went.

Retrieved from "https://calendars.wikia.org/wiki/Continued_fraction?oldid=5337"
Community content is available under CC-BY-SA unless otherwise noted.