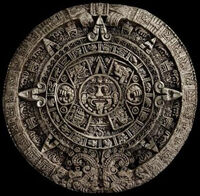 The Maya calendar is actually a system of distinct calendars and almanacs used by the Maya civilization of pre-Columbian Mesoamerica, and by some modern Maya communities in highland Guatemala.

These calendars could be synchronised and interlocked in complex ways, their combinations giving rise to further, more extensive cycles.

The essentials of the Maya calendric system are based upon a system which had been in common use throughout the region, dating back to at least the 6th century BCE. It shares many aspects with calendars employed by other earlier Mesoamerican civilizations, such as the Zapotec and Olmec, and contemporary or later ones such as the Mixtec and Aztec calendars. Although the Mesoamerican calendar did not originate with the Maya, their subsequent extensions and refinements to it were the most sophisticated. Along with those of the Aztecs, the Maya calendars are the best-documented and most completely understood.

By the Maya mythological tradition, as documented in Colonial Yucatec accounts and reconstructed from Late Classic and Postclassic inscriptions, the deity Itzamna is frequently credited with bringing the knowledge of the calendar system to the ancestral Maya, along with writing in general and other foundational aspects of Maya culture[1].

A different form of calendar was used to track longer periods of time, and for the inscription of calendar dates (i.e., identifying when one event occurred in relation to others). This form, known as the Long Count, is based upon the number of elapsed days since a mythical starting point, and was capable of being extended to refer to any date far into the future. This calendar involved the use of a positional notation system, in which each position signified an increasing multiple of the number of days. The Maya numeral system was essentially vigesimal (i.e., base-20), and each unit of a given position represented 20 times the unit of the position which preceded it. An important exception was made for the second place value, which instead represented 18 × 20, or 360 days, more closely approximating the solar year than would 20 × 20 = 400 days. It should be noted however that the cycles of the Long Count are independent of the solar year.

Many Maya Long Count inscriptions are supplemented by what is known as the Lunar Series, another calendar form which provides information on the lunar phase and position of the Moon in a half-yearly cycle of lunations.

A 584-day Venus cycle was also maintained, which tracked the appearance and conjunctions of Venus as the morning and evening stars. Many events in this cycle were seen as being inauspicious and baleful, and occasionally warfare was timed to coincide with stages in this cycle.

Other, less-prevalent or poorly-understood cycles, combinations and calendar progressions were also tracked. An 819-day count is attested in a few inscriptions; repeating sets of 9- and 13-day intervals associated with different groups of deities, animals and other significant concepts are also known.

nerating an ever-increasing sequence of day-multiples, each day in the sequence uniquely identified by its Long Count number). In practice, most Maya Long ieties (Miller and Taube, 1993:68-71).Edit

Mayanists have bestowed the name Tzolk'in (in modern Mayan orthography; also and formerly commonly written tzolkin) on the Maya version of the Mesoamerican 260-day calendar. The word was coined based on the language, with an intended meaning of "count of days" (Coe 1992). The actual names of this calendar as used by the pre-Columbian Maya peoples are not known. The Aztec calendar equivalent was called by them Tonalpohualli, in the Nahuatl language.

The Tzolk'in calendar combines twenty day names with the thirteen numbers of the trecena cycle to produce 260 unique days. It was used to determine the time of religious and ceremonial events and for divination. Each successive day was numbered from 1 up to 13 and then starting again at 1. Separately from this, each day was given a name in sequence from a list of 20 day names:

The system started with 1 Imix', which was followed by 2 Ik', 3 Ak'b'al and so on up to 13 B'en. The trecena day numbers then started again at 1 while the named-day sequence continued onwards, and so the next entries in the combined sequence were 1 Ix, 2 Men, 3 K'ib', 4 Kab'an, 5 Etz'nab', 6 Kawak, then 7 Ajaw. With all twenty named days used, these now began to repeat the cycle while the numbered portion continued, so the next day after 7 Ajaw was 8 Imix'. The repetition of these interlocking 13- and 20-day cycles therefore took 260 days to complete (that is, for every possible combination of number/named day to occur once).

The Maya believed that each day of the Tzolk'in had a character that influenced events; in some regions these beliefs are still current. A Mayan shaman-priest, whose name meant "day keeper", read the Tzolk'in to predict the future. When a child is born, the day keeper interprets the Tzolk'in cycle to predict the baby’s destiny. For example, a child born on the day of Ak'b'al is thought to be feminine, wealthy, and verbally skillful. The birthday of Ak'b'al (along with several other days) is also thought to give the child the ability to receive messages with the supernatural world through somatic twitches of "blood lightning", so he or she might become a shaman-priest or a marriage spokesman.

The exact origin of the Tzolk'in is not known, but there are several theories. One theory is that the calendar came from mathematical operations based on the numbers thirteen and twenty, which were important numbers to the Maya. The number twenty was the basis of the Maya counting system, taken from the number of human fingers and toes. (See Maya numerals). Thirteen symbolized the number of levels in the Upperworld where the gods lived, and the number of "major joints" on the human body (three per limb, plus the neck). The numbers multiplied together equal 260. Another theory is that the 260-day period came from the length of human pregnancy. This is close to the average number of days between the first missed menstrual period and birth, unlike Naegele's rule which is 40 weeks (280 days) between the last menstrual period and birth. It is postulated that midwives originally developed the calendar to predict babies' expected birth dates.

The Haab' was the Maya solar calendar made up of eighteen months of twenty days each plus a period of five days ("nameless days") at the end of the year known as Wayeb' (or Uayeb in 16th C. orthography). Bricker (1982) estimates that the Haab' was first used around 550 BCE with the starting point of the winter solstice.

The Haab' month names are known today by their corresponding names in colonial-era Yukatek Maya, as transcribed by 16th century sources (in particular, Diego de Landa and books such as the Chilam Balam of Chumayel). Phonemic analyses of Haab' glyph names in pre-Columbian Maya inscriptions have demonstrated that the names for these twenty-day periods varied considerably from region to region and from period to period, reflecting differences in the base language(s) and usage in the Classic and Postclassic eras predating their recording by Spanish sources.[4]

In sequence, these Haab' month names (in modern and revised orthography of their Yukatek forms)[5] are as follows:

Each day in the Haab' calendar was identified by a day number within the month followed by the name of the month. Day numbers began with a glyph translated as the "seating of" a named month, which is usually regarded as day 0 of that month, although a minority treat it as day 20 of the month preceding the named month. In the latter case, the seating of Pop is day 5 of Wayeb'. For the majority, the first day of the year was 0 Pop (the seating of Pop). This was followed by 1 Pop, 2 Pop ... 19 Pop, 0 Wo, 1 Wo and so on.

As a calendar for keeping track of the seasons, the Haab' was crude and inaccurate, since it treated the year as having 365 days, and ignored the extra quarter day (approximately) in the actual tropical year. This meant that the seasons moved with respect to the calendar year by a quarter day each year, so that the calendar months named after particular seasons no longer corresponded to these seasons after a few centuries. The Haab' is equivalent to the wandering 365-day year of the ancient Egyptians. Some argue that the Maya knew about and compensated for the quarter day error, even though their calendar did not include anything comparable to a leap year, a method first implemented by the Romans.

The five nameless days at the end of the calendar called Wayeb' were thought to be a dangerous time. Foster (2002) writes "During Wayeb, portals between the mortal realm and the Underworld dissolved. No boundaries prevented the ill-intending deities from causing disasters." To ward off these evil spirits, the Maya had customs and rituals they practiced during Wayeb'. For example, people avoided leaving their houses or washing or combing their hair.

Neither the Tzolk'in nor the Haab' system numbered the years. The combination of a Tzolk'in date and a Haab' date was enough to identify a date to most people's satisfaction, as such a combination did not occur again for another 52 years, above general life expectancy.

Because the two calendars were based on 260 days and 365 days respectively, the whole cycle would repeat itself every 52 Haab' years exactly. This period was known as a Calendar Round. The end of the Calendar Round was a period of unrest and bad luck among the Maya, as they waited in expectation to see if the gods would grant them another cycle of 52 years.

Since Calendar Round dates can only distinguish within 18,980 days, equivalent to around 52 solar years, the cycle repeats roughly once each lifetime, and thus, a more refined method of dating was needed if history was to be recorded accurately. To measure dates, therefore, over periods longer than 52 years, Mesoamericans devised the Long Count calendar.

The Long Count calendar identifies a date by counting the number of days from August 11, 3114 BCE. According to the Maya, there will be a baktun ending in 2012, a significant event being the end of the 13th 400 year period, but not the end of the world. By the way, Mayas living nowadays do not believe in this whole story about the doomsday. They admit that something is going to happen soon, but it is not the end. They follow their culture principles and consider this year to be the year of the beginning of the new era.

Another important calendar for the Maya was the Venus cycle. The Maya were skilled astronomers, and could calculate the Venus cycle with extreme accuracy. There are six pages in the Dresden Codex (one of the Maya codices) devoted to the accurate calculation of the location of Venus. The Maya were able to achieve such accuracy by careful observation over many years. The Venus cycle was especially important because the Maya believed it was associated with war and used it to divine good times for coronations and war. Maya rulers planned for wars to begin when Venus rose. The Maya also possibly tracked other planets’ movements, including those of Mars, Mercury, and Jupiter.


Cite error: <ref> tags exist, but no <references/> tag was found
Retrieved from "https://calendars.wikia.org/wiki/Maya_calendar?oldid=10055"
Community content is available under CC-BY-SA unless otherwise noted.